NCR-16 Gov. Rogelio Don Rontas congratulated each of the 21 regions for their big roles in staging the league. Rontas said the league is pursued as a post pandemic sports fellowship and camaraderie among each regions and its Kuya members.

True with the brotherhood thrust, meaning, goal and vision of the Eagles, Rontas said the league is a manifestation of brotherhood through sports fellowship and is a vehicle to have a much stronger ties and bond.

Rontas said each region really prepared for their team players, coaches, managers and muses to ensure a milestone success of the first ever league.

Rontas said they expect the league  to become an annual event respectively with three seasons in a year. He said the finals and awarding is expected in December and for the second season to start in February 2023.

“We hope to make it a more meaningful league for our health and wellness and our brotherhood we see everyone in court,” Rontas added.

CITY OF MALOLOS–Officials unveil on Monday the marker for the province cultural center during the celebration of its 444th founding anniversary which is marked as a special non working holiday.

Fernando said while Bulacan is now a magnet for global investment, it is also the time for the province to fully recognize and create different measures for the preservation of its arts, culture and heritage through its very own cultural center.

Villanueva who hails in Bocaue said he has always been proud of his Bulakeño blood and race. He call on fellow Bulakeños to continue to make the beloved province shine in culture and tourism amid the present modernization and further future technological advancement.

The senator also urged every Bulakeño to always do their best and give their share in the nation building.

BULAKAN, Bulacan–The 38-year old young priest who wrote novenas and prayers for the town’s different saints and patrons was laid to rest on Sunday at Manila Memorial Park in Dasmariñas, Cavite.

The remains of Rev. Fr. John Paul Sevilla Mabanta, OSA, from Barangay Maysantol this town who is assigned in Cebu province as Provincial Secretary of Sto. Niño de Cebu was buried in Roman Catholic priest’s memorial gardens in Manila Memorial Park after a one night vigil at Nuestra Señora De Gracia Parish in Guadalupe, Makati City.

Mabanta, known as “Fr. JP” in the church community in Cebu and in Bulacan died of heart attack on Aug. 5 while on his duties inside the Basilica Minore del Santo Niño Church in Cebu City.

His remains arrived on Thursday at his family’s residence in Barangay Maysantol for a three day vigil. The whole town mourns his death as  officials, parishioners, friends and relatives paid their last respect and tribute.

The municipal board approved a resolution filed by Councilor Bienvenido “Benjo” Cruz Jr. in  honor of Mabanta’s contributions in further enlivening the parishioner’s faith to the Roman Catholic church. Mabanta conceptualized enhancements to the rituals and festivities during the annual Aug. 15 feast of Nuestra Señora Dela Asuncion, the parish patron saint of Bulakan town. He also wrote novenas for her.

Joey Meneses Rodrigo, member of cultural, heritage and historical group of the town “Kabesera,” said that Fr. JP was also behind creation of novena prayer for San Nicolas de Tolentino, the patron saint of nearby San Nicolas village and also the prayer devotion to Itim na Sto. Cristo, the patron of his own Barangay Maysantol.

The youngest of 14 grand children of famous local matriarch Lola Aurea Mabanta in Maysantol, Fr. JP is survived by his parents Rosendo B. Mabanta and Milagros Sevilla Mabanta and brothers Jose Angelo S. and Jose Enriico, sisters-in-law Loida Mabanta and and Rowena Mabanta and nephews Chino, Lance and Aian and nieces Juliana and Erika.

“Sobrang bait nya, matulungin, mapagmahal at mapagpakumbaba, sobrang close niya sa amin lahat. Siya ang bunso naming pinsan. Lagi siyang andiyan kapag humihiling kami na ipanalangin para sa aming pamilya at nang taong humihiling ng panalangin (He is so kind and helpful. He is close to all of us. He is the youngest among us all. He is always there whenever we ask for him to pray for us and the people who come to him for prayers),” his eldest cousin Aurita Mabanta-Manalo told NEWS CORE.

Another cousin, Anita Clavinez sais JP is really a religious nd church person since he was a young boy. He described him as very kind, quiet, good listener and at times the joker in the group.

On Saturday, his remains was led in a funeral procession and vigils in

Sto. Rosario Chapel in Barangay Tibig, Dambana ni San Nicolas de Tolentino in Barangay San Nicolas and the Holy Crucifix in Our Lady of Assumption Parish for an 11:00 a.m. mass before it was transfer for a vigil at Nuestra Señora de Gracia Parish in Guadalupe in Makati City and Guadalupe Monastery also in Makati City, Metro Manila. 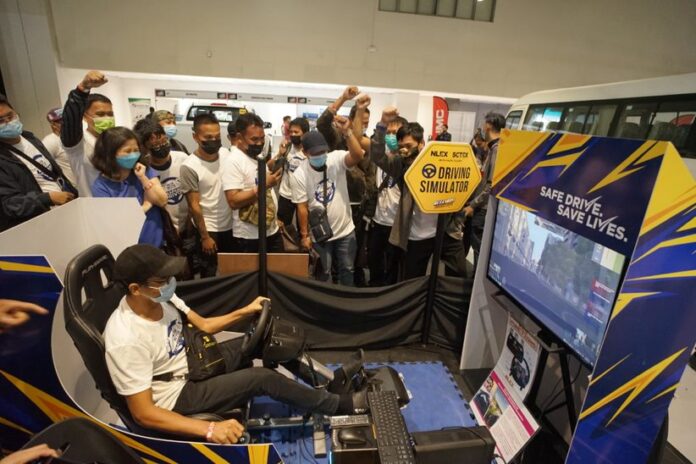 Held during the Manila Commercial Vehicle Show at the SMX Convention Center in July, the caravan is part of the tollway company’s commitment to provide safer expressway experience to NLEX-SCTEX motorists.

“We always strive to make our expressway safe by rolling out road safety education programs in partnership with our stakeholders, exemplifying the culture of safety that we endeavor to instill among our motorists and stakeholders,” NLEX President Luigi Bautista said.

“We are one with NLEX-SCTEX in their road safety education initiative. As a shared responsibility, we aimed at eliminating road accidents caused by negligence or driver error, making this program even more relevant and value-adding for the transport sector”, CTAP President Maria Zapata said.

This road safety education effort highlights safe expressway driving through NLEX Usapang Driver and #NLEXPatrolBreak.  The discussion zeroed in on enforcement of road rules and apprehensions within NLEX-SCTEX.

Participated in by 226 transport members,  they were treated to fun interactive activities at the NLEX booth such as driving and drunk driving simulation, as well as, Spin n Win and buzz wire. An Easytrip Pitstop kiosk was also setup for easier facilitation of Easytrip RFID transactions such as installation, checking of balances, reloading and updating of customer information. Indeed, NLEX Corporation continues to roll out initiatives through various programs dealt mainly on strengthening road safety education not only for motorists but also for stakeholders.

Wanted for rape of daughter nab in Navotas

CITY OF MALOLOS–Police arrested one of Bulacan’s Most Wanted Persons for charges of rape filed  by his own daughter after more than a year in hiding in Navotas, Metro Manila on Thursday.

Bulacan Regional Trial Court Br. 16 Judge Sita Jose Clemente issued the warrant of arrest against the accused in Feb. 10, 2021 with no bail recommended for several counts of rape filed against him by his 16 year old daughter.

Germino said the crime was committed since 2019 but the helpless victim just kept it to herself because her father threatened to beat her up if she will report his immoral and criminal acts against her.

City of Malolos Police Chief Col. Ferdinand Germino identified the suspects as Regie Garcia, 32, a factory worker and Angelo Asistin, 27, a shoe repairman both from Barangay Tikay in Cuty of Malolos.

The “duo” flagged down Mark John Contridas Butal, 23 and Ronel Rabina, 24, also both from City of Malolos on board their motorcycle at about 8:40 p.m. along Barangay Sto. Nino.

They demanded for the driver’s license of the two motorists including motorcycle documents and ordered them to follow them to the police station. But in a dark area in Barangay San Juan, the two threatened their victims using bladed weapons and announced the hold-up. They took the cash money amounting to P7,000, cellular phone, other valuables of the victims and immediately fled away.

The victims then reported the incident to the police. Immediate police response led to their arrest.

The police recovered the cash money, mobile phone and the other valuables stolen from the victims.

SAN RAFAEL, Bulacan–Farmers in the province can now expect more yields and increase earnings as they go high tech today through the use of modern farming equipment and facilities–drone seed spreader and mechanical rice transplanter.

Gov. Daniel Fernando prioritized the purchase of the equipment for Bulacan farmers to benefit from today’s advance technology in agriculture to help improve their production and the rice farming industry in the province in general.

Fernando said the pandemic has taught everyone the need to strengthen the agriculture, particularly rice dependency for food security and it is now the time to put on top of priority the farmers sector similar to the thrust of President Ferdinand Marcos.

Gloria Carillo, Bulacan provincial agriculture officer said seed spreader drones can spread up to 40x faster than manual spreading, and allow users to spread seeds quickly and efficiently on hills, wetlands and other land terrains. The drone spreader can be used also for pesticides spreading, she said.

Carillo said Mechanical Rice Transplanter which is a manually-operated machine transplants rice seedlings in rows with a definite distance or space between plants. This provides easier task for planting.

Bulacan farmers in different towns will share usage of the equipment as the provincial government intends to purchase more in the coming months.

Farmers are now on their second or wet season planting.

CITY OF MALOLOS–Fresh college graduates in Bulacan are now job priorities in all SM Malls in the country through SM Supermalls Academic Partnership Program.

Clerical and administrative works are available for the young professionals in all SM Branches in the country, Cunan said.

Also part of the MOA is an internship program for graduating students where they will later be recruited for employment.

In the internship programs, Cunan said the learning sessions will help students be equipped with knowledge and skills as company expert will personally handle their learning and training.

Cunan said that aside from CEU and St. Mary’s College in Baliuag, SM Bulacan malls is also set to seal their partnership with Bulacan State University and Baliuag University on the coming months.

SM’s school partnership and job fair are the many ways SM gives back to its community. With the recent partnership, SM Supermalls hopes to contribute to the community development in the province of Bulacan through academic linkages.