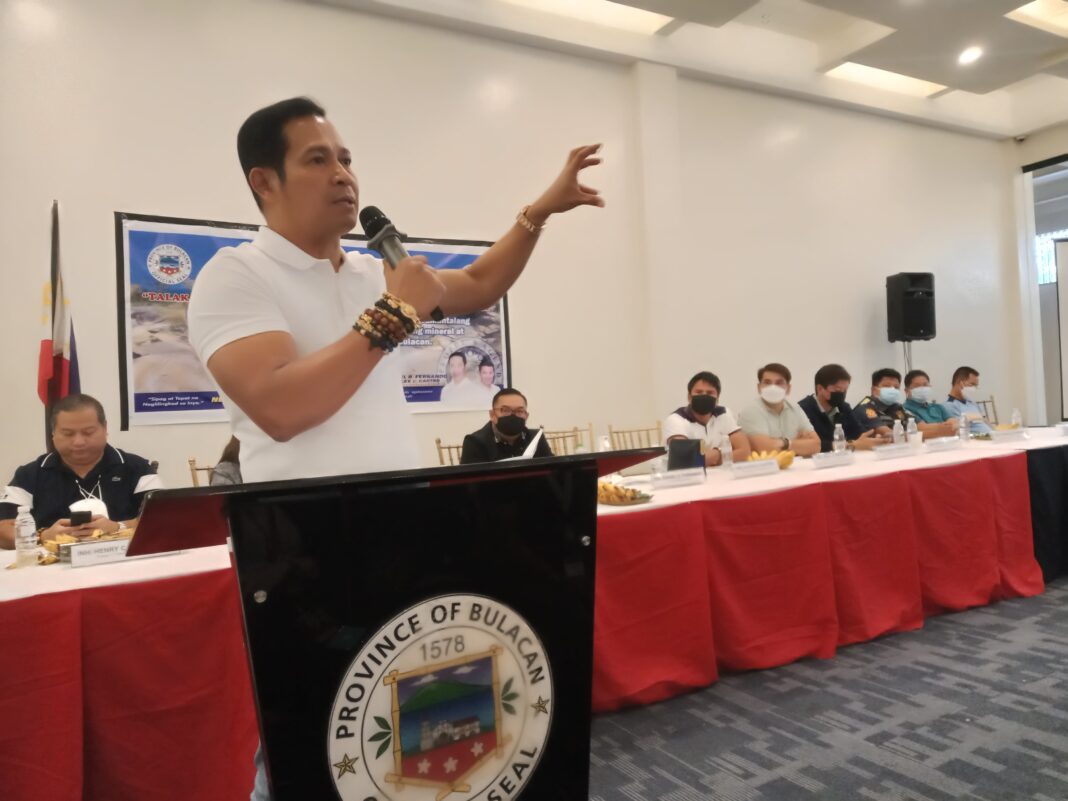 CITY OF MALOLOS–Bulacan is adopting the matrix of Pampanga against overloaded trucks filled with quarry and mined minerals which damage the national even provincial and municipal roads of both the two provinces being the passway of Metro Manila-bound Northern and other Central Luzon trucks with hauled materials.

Gov. Daniel Fernando said on Wednesday that Bulacan and Pampanga will now implement one single policy against overloading trucks which only limit the weight to 30 tons.

Fernando met about 300 trucking, hauling and mining industry members in Bulacan and address their concerns more than a week after he ordered the suspension of all mining and quarrying operations in Bulacan mountains and the transport of these minerals along the province thoroughfares.

The governor disclosed a recent talk he had with Pampanga Gov. Dennis Pineda where he was asked to be in unison with the province plight in protecting the roads. “Boss, ayusin na natin itong problema natin sa quarry at overloaded na mga truck na nagdadaan,” the governor approach him, he said.

Fernando said while Bulacan has its own matrix, it will be easier for the government to implement the law and for the mining and trucking industry to obey if only a single rule is being implemented.

Fernando said EO 21 which is an indefinite suspension of the mining and quarrying and their transport to Metro Manila and other locations in and out of Luzon is aimed both to protect Bulacan’s natural wealth and its national and local roads.

The governor said it is the time for everyone to exert effort in preserving the environment, to stop its illegal operation and to start caring for the roads.

He warned violators that they will be arrested. “Until I lifted the suspension, not anyone from you should operate and transport your quarry and mined minerals. You have to first secure permits and fix your trucks. You are inside my province and you are bound to follow,” the governor said.

“You elected me as your governor, let me do my duties to protect our environment and save our roads. Government’s money is wasted everytime because of the regular repair and construction of roads that are damaged by the overloaded trucks. Our forests are also similarly devastated. Let us put an end to all these. One day, we will all die, and what we should leave as legacy is the good deeds we had during our lifetime,” he said.

Department of Public Works and Highways (DPWH) First Engineering District Office Chief Henry Alcantara said despite the works and rehabilitation of the roads and the weighing scale they do on their part, still, they do not have the police power to go after violators.

“We hit two birds and even more in one stone. We go after illegal miners, illegal quarry operators and illegal loggers and we also go after overloaded trucks that destroy our roads,” Degala told NEWS CORE.

Under Bulacan’s Revenue Code, sand and gravel like boulders, banday-banda, pebbles, base coarse should only be 20 cubic meter load per truck including marbleized limestones scraps, semi-block, block and tearose.

Fernando said once he lifted the suspension, these loads and the 30 tons weight requirement should be strictly observed.

Richard Allan Cruz a member of the hauling and trucking industry in Norzagaray where three cement factories operate said Bulacan has to revisit and attune its Environmental Code because it was passed more than 5 years ago and many are no longer applicable today.

Perlito Hernandez Jr. of San Pablo Trucking said they will obey with the EO of the governor and the environmental code and will wait for any new  ordinance that will serve as their guide.