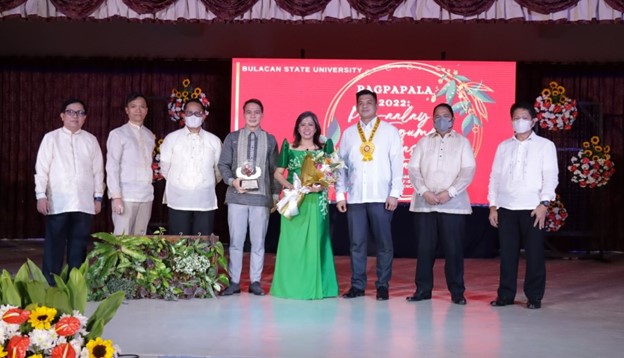 The Bulacan State University (BulSU celebrated its 118th founding anniversary with a mass for thanksgiving held at the BulSU Valencia Hall on December 5, 2022, according to BulSU President Dr. Cecilia S. Navasero-Gascon.

Executive Vice President Dr. Teody C. San Andres gave his opening remarks. He acknowledged the efforts of everyone who gave their time for this celebration. It was followed by the presentation of the accomplishments of all the colleges spearheaded by their respective Deans.

A message of gratitude was pronounced by President Dr. Gascon as she expressed her appreciation for everyone who participated in the opening ceremony.

She also recognized the participation of Senator Win Gatchalian who is ably represented by Mr. Jojo Rosales. Concluding her speech, she remarked on a bible verse Psalm 78:72, “With upright heart, He shepherded them and guided them with His skillful hand.” Further, she stated that she is full of joy as the BulSU celebrates its foundation week again after two years, a post pandemic endeavor.

Meanwhile, the oath-taking ceremony and the promotion of faculty through the NBC 461 and other personnel were led by Dr. Gascon. She extended her gratitude for their commitment and accountability to their profession. BulSU Media Relations Office